In the south eastern part of the Watarrka National Park is Kathleen Spring. This is at the end of a gorge and has been used by aboriginals to hunt and gather food in its rich fertile valley. Later the cattlemen used it to contain and trap cattle for branding. A fence was put up across the opening to the gorge but left open to allow animals to come and go. When time came to manage the cattle the fence was closed off and the cattle trapped. A tank was also install to water the cattle and water was pumped from the spring at the end of the gorge to the tank by windmill. 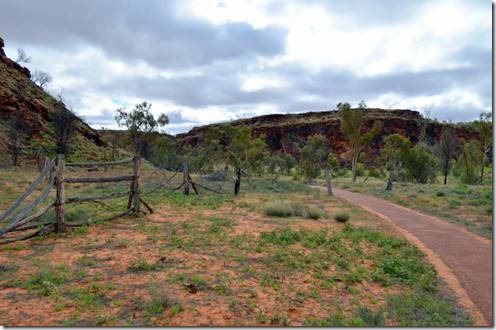 Stockyard fence across mouth of gorge 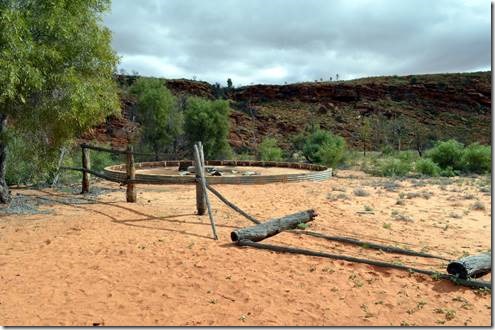 Remnants of the Water Tank 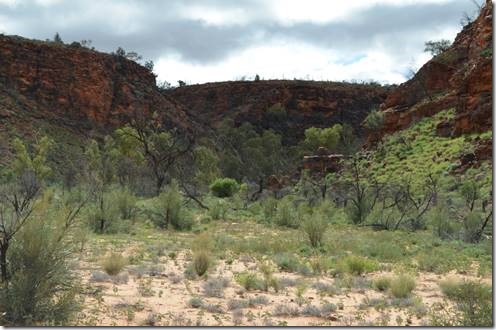 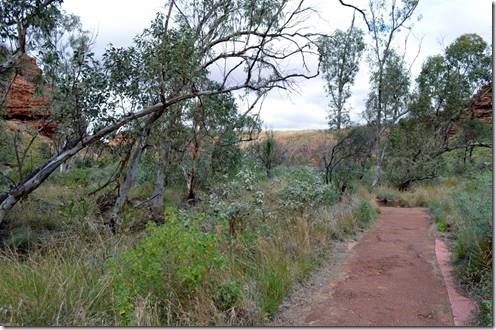 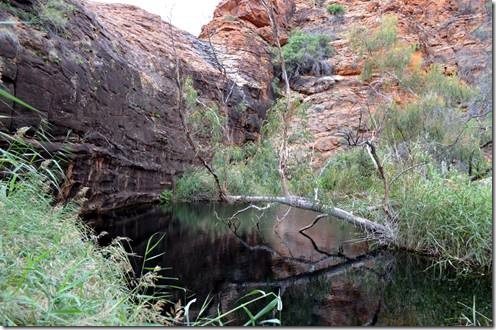 Spring at the end of the gorge.

This walk is a very easy walk and is suitable for wheelchair access. It was quite peaceful in the gorge and the vegetation is varied.

There were many flowers in the gorge.

We decided to break camp at Uluru a day early and head for Kings Canyon. Kings Canyon wasn’t on our list of places to stay thinking we would do a scenic flight over it. The campground and village at Yulara were fine but it didn’t feel relaxing. Kings Canyon is about 140km back towards the Stuart Hwy then about 180km to the north west. The road is sealed all the way. After leaving the Lasseter Hwy and up about 70 km on the Luritja Road we took a rest stop. Pulling into the rest stop we noticed what appeared to be a dog lying beside a campervan. When we parked it raised its head and decided to come and investigate. He was one of the local dingos and a fine looking chap too.

“Oh well I’ll see what this other mob have.”

So off he set back across the park to see if anything was on offer. 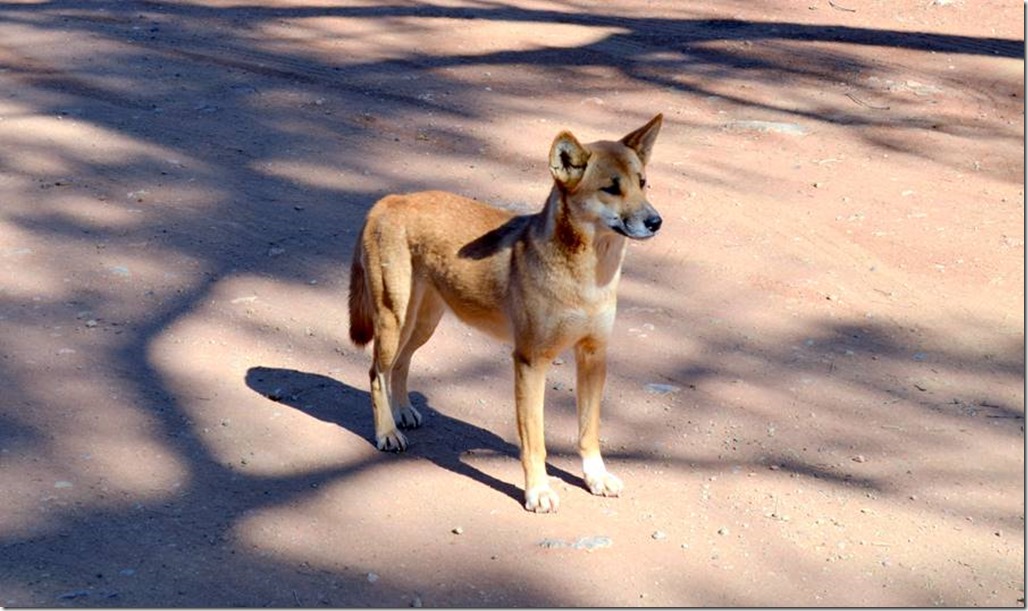 We Had fuelled up at Curtin Springs as the fuel price for diesel at Yulara was over $1.85 a litre and the fuel at Kings Canyon was $1.96 so $1.78 was quite reasonable. Hopefully we can get out to the cheaper fuel when we leave. Lunch was at Kings Creek Station 40km from our camp site but it was a nice stop. Their Sulphur Crested Cockatoo was quite talkative.

The campground at Kings Canyon Resort is in the Watarrka National Park at the base of the Middle Range. It is a great view of the ranges and as sunset approached I decided I would attempt a time lapse photo of the range at sunset. After a bit of a fiddle I managed to take a series of photos 1 minute apart as the sun set. The clouds obscured the sun at different times during the shots and a dingo wandered across in one frame. Just before the sun finally went below the horizon the cloud broke allowing the range to come into full colour. The soil in the foreground is being worked on as they expand the park but the red colour is its natural shade. I have been able to view the time lapse on my tablet but as yet not worked out how to save it to show it as a movie. I will find the answer when we get back on the internet.

View of Ranges from Caravan Park

While we were camped at Kings Canyon I left my crocs at the door then went out a little later in the night only to find one of my crocs had disappeared. I searched in the dark but couldn’t find it. Next morning had another look around in the morning light but still no croc. It was only a little later after the van next door had left I found the missing croc hiding in some rocks. Mr or Mrs Dingo decided that crocs were too expensive for their new family so they abandoned it.

It was time for a little exertion  so we went for a walk in the Olgas.

We chose a simple walk, Walpa Gorge Walk. This is a 2.6 Km return moderated walk. We set off with backpack with food and water supply, warm clothing as the wind was quite cool. Really it is a simple walk so we just took some water, camera and hat and set off. This walk takes you into Walpa Gorge in the Olga formation. The walls of the gorge are conglomerate rock with the embedded rocks being rounded and would be 200 to 500 mm in diameter. The walls rise up probably over 100 metres. the bottom of the gorge is a bed of released rocks as the walls have eroded over time. 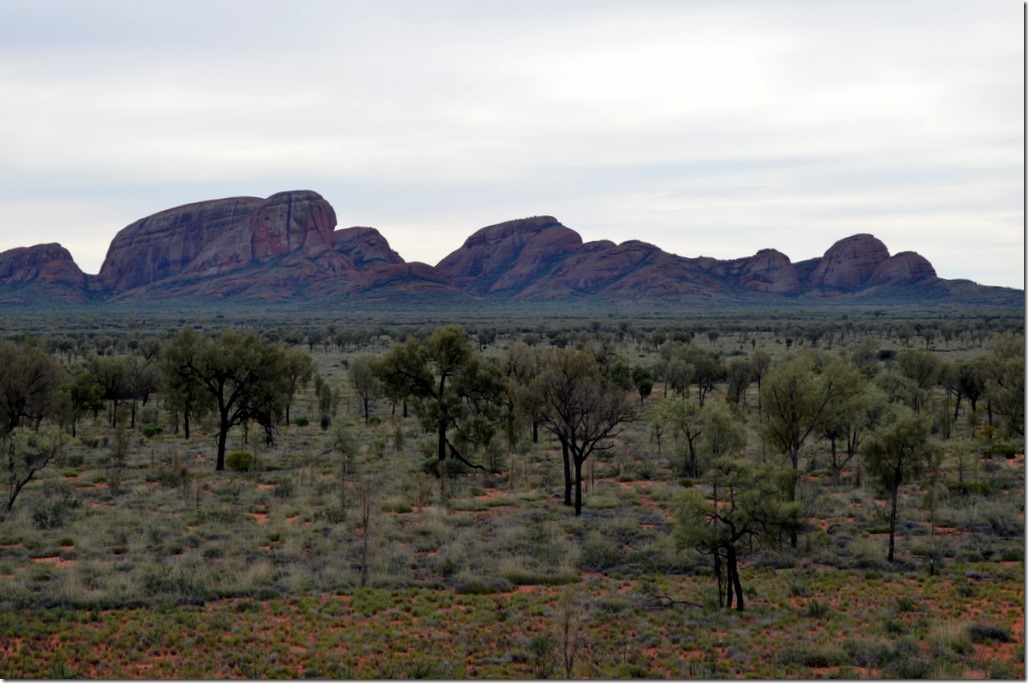 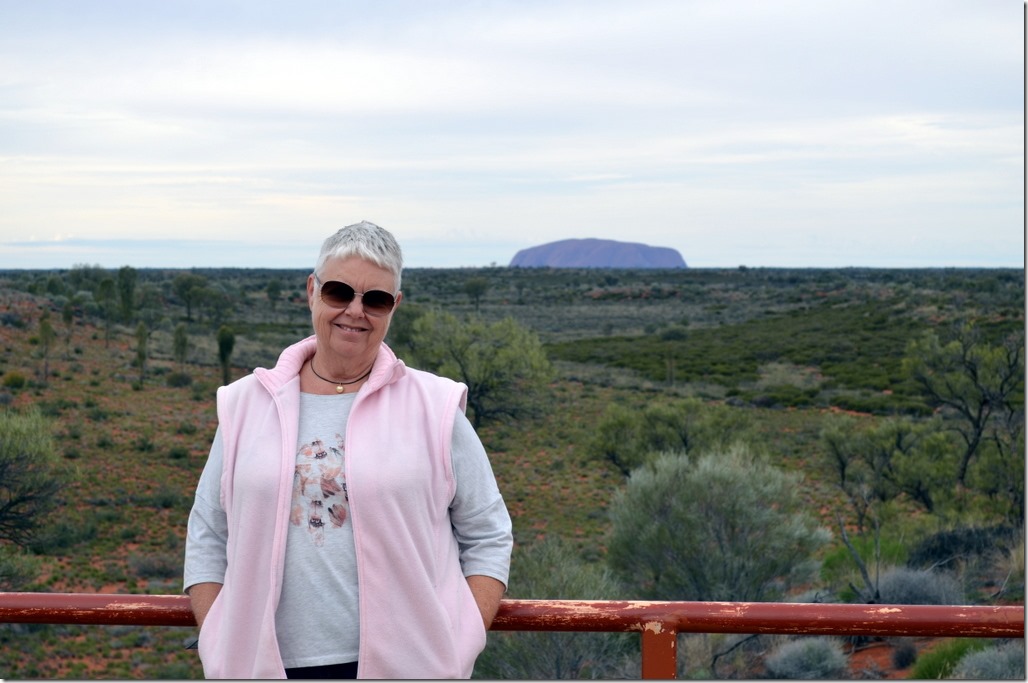 From a Dune viewing platform for the Olgas, Ayers Rock can also be seen. 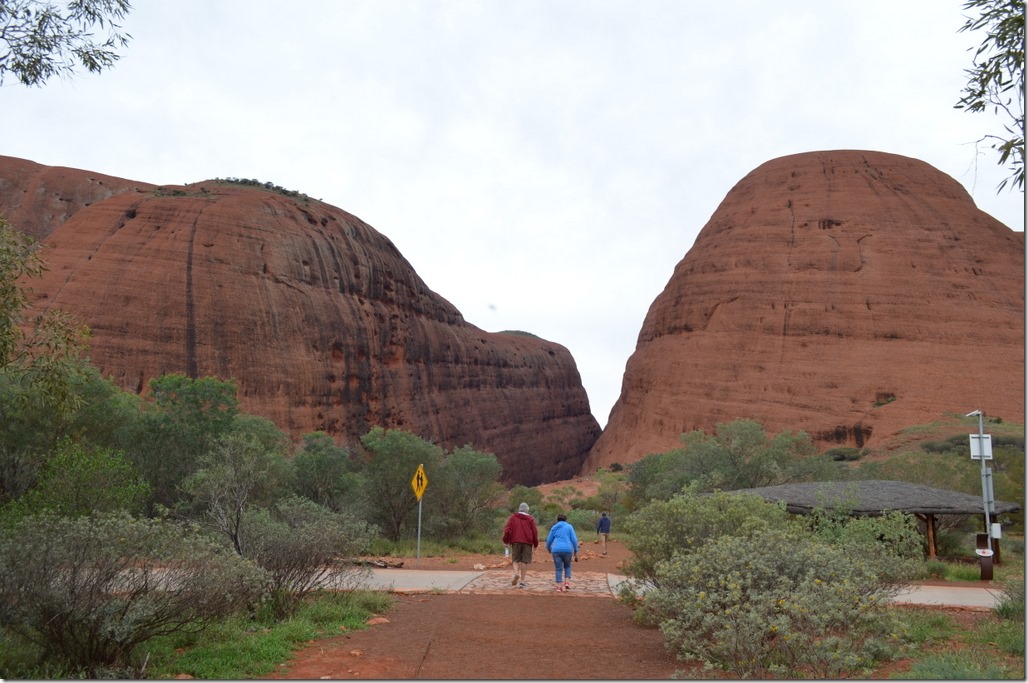 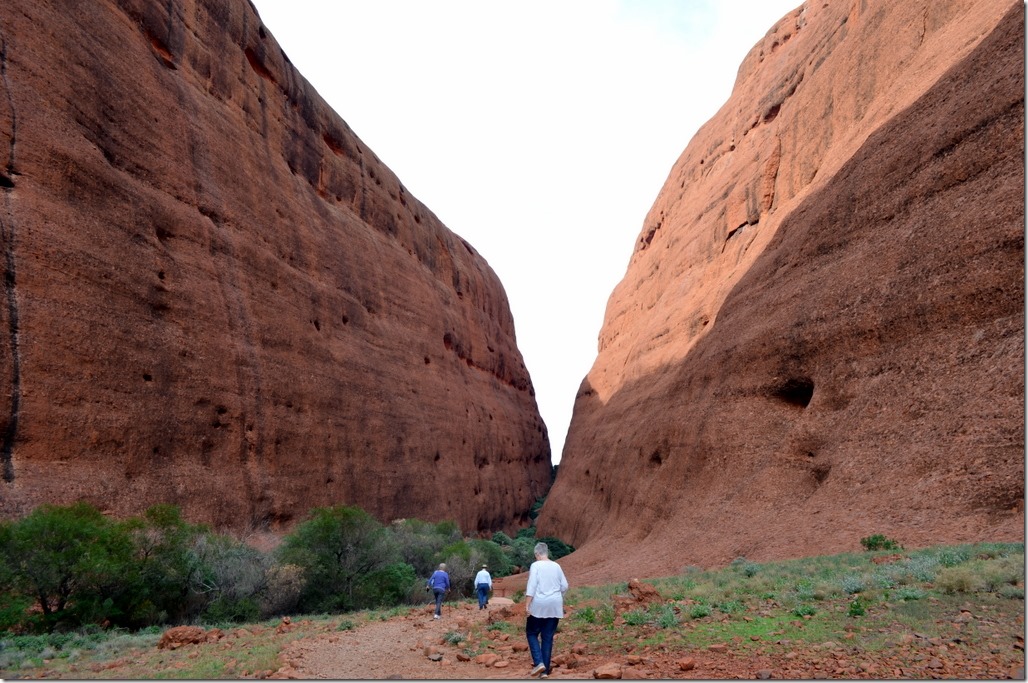 As you go further into the gorge the vegetation increases as these is more permanent water supply. 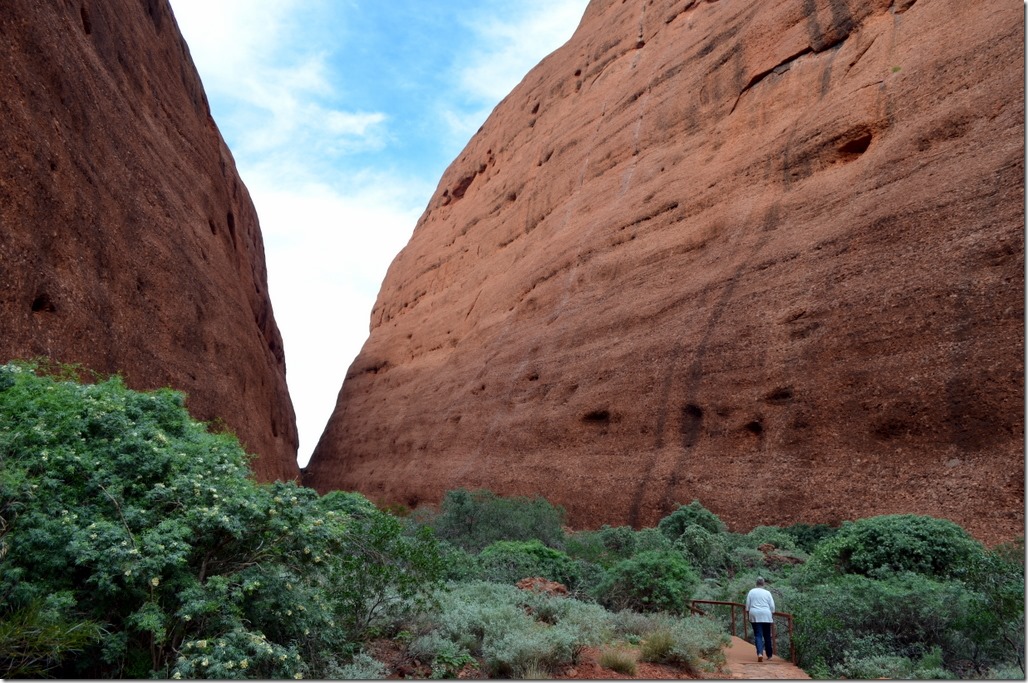 Looking back the desert stretches off into the distance. 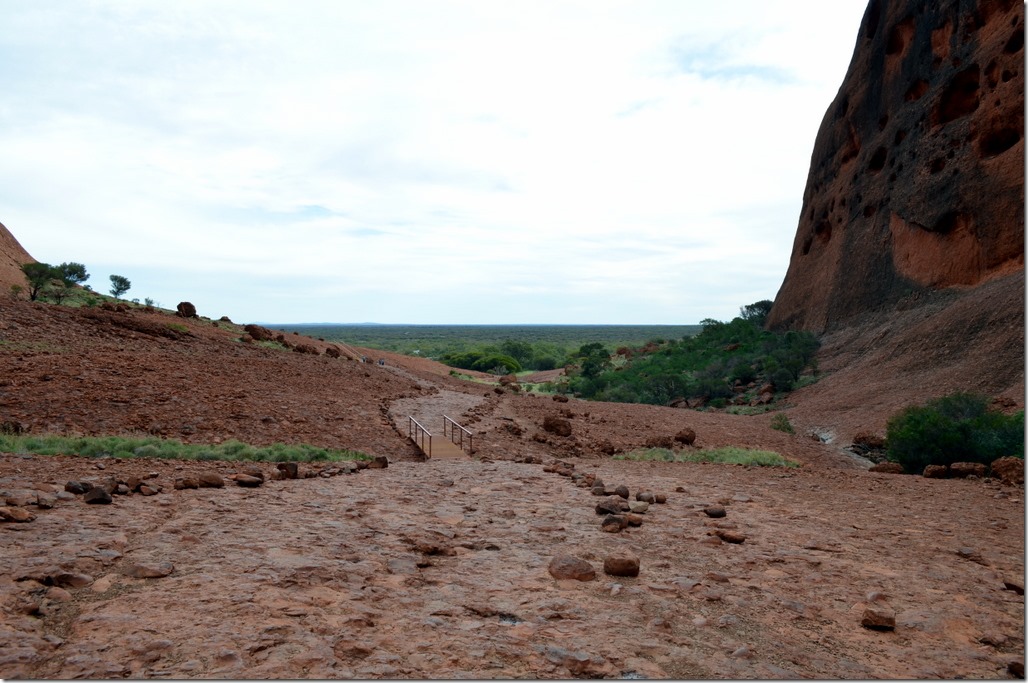